The year 2019 was a very productive year for the students in the Interdisciplinary PhD Program in Biostatistics. Students in the program were either the first author or co-author of eight peer-reviewed publications that were either published or formally accepted in 2019. The complete list of publications is below (student name bolded):

Zhang Y. and Lu B. Accounting for Matching Structure in Post-Matching Analysis of Observational Studies. Communication in Statistics—Simulation and Computation. Formally accepted. Biostatistics PhD student Yuan Gao won an American Statistical Association Section in Genomics and Genetics Student Paper Award for her paper “A phylogenetic approach to inferring the order in which mutations arise during cancer progression.” Yuan will be presented with her award at the 2020 Joint Statistical Meetings, August 1-6 in Philadelphia, PA. Congrats to Yuan! The Division of Biostatistics along with the Department of Statistics held their annual poster session on September 12, 2019. The event was an excellent opportunity for students to showcase their research to classmates and faculty and to receive valuable feedback. The following Biostatistics PhD students presented during the event:

Xiaohan Guo, “Amplitude-phase Separation of Trace-variogram and its Applications in Spatial Functional Data”

PhD Students to present at the 2019 Joint Statistical Meetings 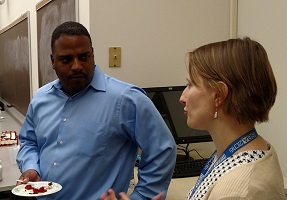 On September 29, 2016, Eli Lilly Statistician and Senior Research Advisor Brian Millen visited Ohio State University. He took time to get to know the students and faculty of the Statistics and Biostatistics graduate programs. Since Eli Lilly's headquarters is just a few hours down the road in Indianapolis, we look forward to developing collaborations and look forward to welcoming him back to Ohio State soon. 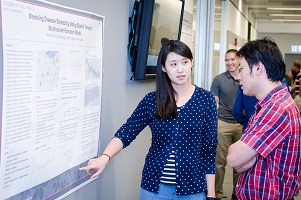 Students and faculty alike enjoyed the 2016 annual Statistics and Biostatistics Graduate Student Poster Session, held in the Cunz Hall atrium on September 15. Two of the eight posters were presented by Biostatistics PhD students:

During the session, senior graduate students discussed their research work with graduate students and faculty across the Statistics and Biostatistics programs while enjoying some light refreshments. In addition to learning about the new biostatistical work, the event was a wonderful chance to catch up with friends and colleagues and meet new students at the start of the new academic year.

In early August, many of the Biostatistics PhD students traveled to Chicago to attend sessions explaining cutting-edge biostatistical developments, explore employment opportunities and meet colleagues and friends at the Joint Statistical Meetings (JSM). Ohio State student Brittney Bailey was even featured on the JSM website front page!  The photo (linked above) shows her strengthening her network at the Student Mixer. Four Ohio State Biostatistics PhD students presented their work over the course of the five-day event: 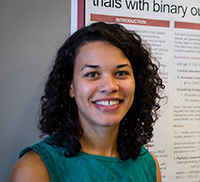 Congratulations to Brittney, who was awarded the Lester R. Curtin award, "established to help promising young health statisticians get the skills and training they need to make significant contributions in their area of study" (ASA website). Brittney traveled to the Conference on Statistical Practice in February to receive her award. She is the second Ohio State Biostatistics student to receive this award in the last three years. Again, congratulations Brittney! The Division of Biostatistics along with the Department of Statistics held their annual poster session on September 24, 2015. The event provided an opportunity for guests to view student work and ask questions. More photos from the event are posted in this slideshow.

A rising star has emerged from the College of Public Health, Division of Biostatistics. Robert Ashmead, PhD ‘14, is a recipient of The Health Policy Statistics Section of the American Statistical Association Student Paper Competition. Ashmead will present his work at the 2015 Joint Statistical Meetings, the largest gathering of statisticians in North America, held in Seattle this August. Read more here.

One of our own PhD students, Dave Kline, was featured in the 2014 ASA Presidential Address! Dave's appearance starts at approximately 13:20 in the video.

The time Robert Ashmead has committed to research has paid off. The fifth-year doctoral student in the Interdisciplinary PhD Program in Biostatistics is the recipient of the American Statistical Association (ASA) Survey Research Methods, Government Statistics, and Social Statistics Sections’ Student Paper Award.

Several graduate students to present at the 2013 JSM meeting

Kevin Donges, a Biostatistics PhD student, was named the inaugural recipient of the Gary G. and Carolyn Koch Fellowship in Biostatistics.

If you have trouble accessing this page and need to request an alternate format, please contact us using this form.